Who Is First Coast CCU?

First Coast Community Credit Union is a full-service financial cooperative serving those who live, work, own businesses or attend school in Putnam, Flagler, and St. Johns Counties, Florida. Being a cooperative means we return our profits to our members through lower loan rates and higher dividends, giving financial advantages to our members and providing the guidance to succeed.

Once you are a member, you’re eligible for a lifetime of financial benefits, even if you move or change jobs. Plus, every member can invite their family members to join, passing along the savings.

Interested to see what we’ve been up to this year? Check out our most recent annual report! 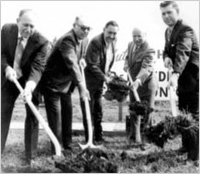 The credit union was founded in 1948 by a group of employees from the Hudson Pulp and Paper Mill. It was initially run out of a cigar box in a desk drawer and was chartered under the name of HP&P Federal Credit Union, serving the employees of the paper mill and their immediate families.

Over the next twenty years, the credit union grew and the cigar box was replaced by offices in the plant’s administrative area.

In 1996 the credit union opened its first branch office in the Big Lots Shopping Center in Palatka, and in August of 1998, the new branch at 306 South Palm Avenue was opened as the new headquarters. During that same year, G-P Federal Credit Union was granted a community charter and changed its name to G-P Community Federal Credit Union. In May of 2003, the credit union's charter was converted from federal to state and the name was changed to First Coast Community Credit Union.

First Coast Community Credit Union continues to expand to serve its members and is striving to be the premier financial institution in Putnam, Flagler, and St. Johns Counties.

Your Board of Directors is a group of volunteers that represents the membership and acts as your voice in all credit union matters. Each member of the board is a member and owner of the credit union, just like you.

You have clicked on a link that will take you to a third-party website that is not related to, endorsed by or responsible for by FCCCU. Please read the following disclaimer and click "Continue" to continue on to the third-party website. By clicking continue you agree that:

Please email info@firstcoastccu.com or call 386-328-5555 for any issues related to the following linked website.

Link clicked:
Continue onto the link of the external resource. Cancel